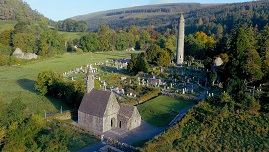 The beautiful scenery of Wicklow and historic locations in Dublin are set to wow millions of viewers in the US and Canada – in the season finale of the hit ABC drama series Quantico, which will air later today (Friday, 3 August).

Filming for this highly anticipated, final episode of Quantico took place here in April – with actors Priyanka Chopra, Jake McLauglin and Blair Underwood filming on location in a number of our most popular attractions, including Trinity College, Christ Church Cathedral, Glendalough and Powerscourt Estate.

Tourism Ireland says that the special, behind-the-scenes featurette for the season finale is an excellent way of showcasing Ireland to a new audience of potential holidaymakers.

Niall Gibbons, CEO of Tourism Ireland, said: “We’re delighted that the final episode of Quantico was filmed in Ireland and this behind-the-scenes film is another really great opportunity to showcase Dublin and Wicklow to a wide audience of Quantico fans in two important tourism markets, the United States and Canada.”

In the behind-the-scenes film, Priyanka Chopra praises Ireland’s stunning beauty, saying: “If you have not been to Ireland, please watch Quantico – and you will have been to Ireland! That’s how beautifully our director Russell Fine has shot it … such amazing, picturesque locations.”