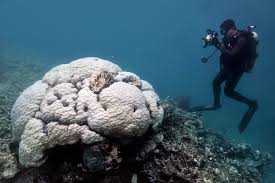 According to a new study report, coral reef tourism in Australia maybe wiped out in case climate change is allowed to accelerate.

The study, commissioned by the High Level Panel for a Sustainable Ocean Economy, underscores the projected reef tourism revenue drop in different countries depending on the level of climate change until 2021.

“Our policies to take action on climate change are getting results,” he said.

“We will continue to progress those initiatives because taking action on these issues is incredibly important.

The report shows that even in a conservative scenario, where global temperatures increase by less than two degrees by 2100, coral reef tourism would fall 42 per cent.

If climate change is allowed to accelerate, it would fall by 94 per cent.

Further, it says the countries with the coral reef tourism industries that would suffer most would be the Philippines, Thailand and Indonesia.

Dr Sinclair said Australia was a big contributor to global pollution and must do its fair share to fix the problem.

“Rapid, deep cuts to pollution are essential if we are to avoid the worst climate damage; that starts with switching from coal and gas to renewables,” he said.

The High Level Panel for a Sustainable Ocean Economy is made up of 14 countries, including Australia.