Ratha Yatra marks as a spectacular congregation in the world; boosts tourism 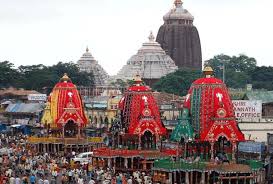 The Rath Yatra in Jagannath Puri is one of the ancient festival now becomes state’s icon of Odisha. It is now boosting tourism in some of the Indian states like Odisha, West Bengal and Gujarat.

This nine-day annual festival of Jagannath Rath Yatra festival begins today and millions of devotees across the world congregate in the pilgrim town of Puri to witness the chariot festival.

This Chariot festival commemorates the annual journey of Lord Jagannath, Lord Baldev, and their sister Subhadra to their aunt’s place, the Gundicha Temple and it is said that anyone who gets the opportunity to pull their cart on way is bestowed with the benediction of washing away all the sins he may have committed in all his previous births.

To boost the tourism during Ratha Yatra, Odisha government took some of the major steps in order to tighten the security and also make the festival secure to all. In a bid to provide information electronically and promote Digital India, East Coast Railway (ECoR) has launched Rath Yatra Mobile App ‘ECOR Yatra’. This mobile application will live stream the Rath Yatra, is expected to benefit the passengers, especially devotees who are coming to Puri to witness the world famous car festival-2018.

The Passengers having android based smart phones can download the app from Google Play Store and get the information related to different regular and special trains along with other facilities provided by ECoR during Rath Yatra.

This mobile app has complete details of special trains scheduled to run during the period from July 13 to 24, Live Train information including platform number allocation at Puri for respective trains, lodging arrangements, including facilities of tourism, retiring rooms and shed arrangements available through this app.

IRCTC besides the Rath Yatra ritual schedule.The app also has in store information of 40 additional ticket counters at Puri and wayside stations, transport facilities at Puri by OSRTC and pre-paid taxi along with fares,  enquiry facilities like seat availability, fare, NTES and PNR.

During this festival, Indian Railways operates 184 special trains and 200 special buses to Puri to manage the heavy footfall of national and international visitors during the occasion.

A new railway station in Bhubaneswar and a host of other infrastructure projects were inaugurated for Lord Jagannath’s Rath Yatra festival. The new station of Bhubaneshwar, constructed at a cost of Rs 30 crore, was dedicated to the public by Union Petroleum Minister Dharmendra Pradhan.