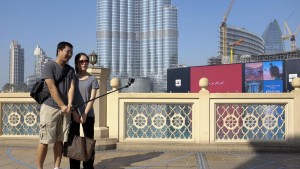 According to new figures released before Chinese President  Xi Jinping’s visit to Dubai revealed that the number of Chinese tourists to Dubai have more than doubled in the last four years.

There was a reported growth of 119 percent in Dubai considering the overnight Chinese visitors from 2014. It revealed a year-on-year increase of 41.4 percent from 2016 to 2017.

Dubai Tourism asserted of continuous focus on its fourth top source market and there were a number of key agreements signed with major players in China.

China is one of Dubai’s fastest growing source markets as it closed first five months of 2018 having a record 400,547 visitors. The growth is expected to continue in 2018.

Helal Saeed Almarri, director-general of Dubai Tourism stated that their approach to engaging Chinese tourist is two-fold along with landmark partnership, investments and marketing activities  which are carried out across 48 cities across China. This is partnered with a city-level China readiness strategy in Dubai to increase the Chinese tourist experience.

In 2016 visa-on-arrival was introduced for the Chinese national to increase the air capacity by national carriers from China. At present the number of national carriers is 30 flights a week along with a 13 percent increase in non-stop seat capacity in 2017 which contributed immensely to its rapid growth.

The Dubai Tourism had signed agreement with Huawei in January, it preloads devices with user-generated and official cinematographic content of Dubai. The agreement was further expanded in May and the Huawei Mobile Services agreeing to provide useful and accessible content about Dubai through the company’s newly-updated SkyTone travel and roaming apps.

There will be MOU with the Fliggy, Alibaba’s travel platform and Tencent (China’s mega internet conglomerate) which will help in promoting Dubai’s position as a premiere destination for Chinese visitors along with launching an audio guide feature on WeChat.