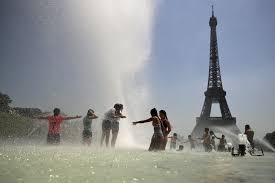 This week’s record-breaking heat in many parts of Europe is affecting the continent’s peak tourist season, with crowds of visitors in the sweltering mix with cities trying to care for the vulnerable residents.

Parts of France, Spain, Italy, Germany, Poland, Switzerland and the Czech Republic have seen temperatures soar into the 90s and even past 100 degrees Fahrenheit, which is at least 20 to 30 degrees above normal. The extreme heat is expected to last into the weekend in some areas.

France has closed schools and canceled tests. Germany put speed restrictions on some of its famed autobahns regarding concerns over the heat’s effect on the road surfaces. Paris has opened its pools for extended hours, creating temporary misting stations and cooling rooms. On its tourism site, the city offers a map of cool spots and lists of parks and waterfront options.

Mark Elliot, a storm specialist and on-camera meteorologist at the Weather Channel, said that since places like Paris and Berlin typically have moderate weather this time of year, travelers may not be expecting a scorching June.

“You have to schedule break times, you need to make sure you have much more water available than you think you need,” Elliot said.

Leslie Gannon, director of U.S. clinical operations at travel health medicine company Passport Health, said that travelers should stay inside if possible, seeking out locations with air conditioning like malls or museums. Clothes should be loose fitting and light in color, and strenuous exercise should be avoided altogether or limited to the early morning or late evening. Tourists should drink plenty of water.

Gannon said that if tourists feel worse, they should seek medical attention.

Nights will be cooler, of course, but Elliot points out buildings without air conditioning wouldn’t stand much chance to cool if temperatures haven’t dropped below 80.