Renovations in Marmalade Hotel in Scotland 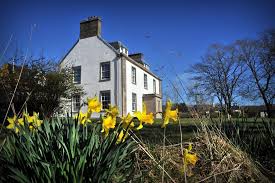 To the existing eleven rooms 23 new luxury guestrooms will be added along with relaxation facilities.

The hotel is located in the harbor town of Portree on the stunning Isle of Skye  which has breathtaking  landscape and coastlines.

The luxury hotel is steeped in history as it showcased the classic Georgian architecture and overlooks the awe-inspiring views of the harbour town.

The hotels’ 11 bedrooms are inspired by the surroundings which creates a comfortable place for the guests to unwind and relax.

Guests will feels revitalized and re-charged by the Marmalade as the bedroom features picturesque views of the harbour town and the panoramic surrounding countryside.

In the new extension additional rooms will be housed which is constructed over three floors  with mostly south facing rooms and mesmerizing views across the bay to the Cuillins mountain range.

There is a limited palette of natural materials like timber, slate, corrugated metal and natural stone having intricate detailing.

Marmalade Hotel general manager, Graham Kelly felt thrilled to offer more to the guests. He said that Marmalade has always been a landmark property in the Scottish Highlands  they had many loyal guests who have been coming to the hotel for years.