In return for denuclearization, the US has offered assistance to N. Korea in setting up tourist area! 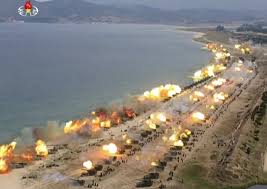 The U.S. has reportedly offered a long-term plan to assist North Korea in promoting a tourist area in exchange for denuclearization at the time of a recent working-level talks in Stockholm that concluded with the North side walking out, as per a recent report.

The negotiators from America had designed a plan to build up the Kalma tourist area, the South’s Hankook Ilbo newspaper reported on Saturday, referring to an unidentified top South Korean diplomat. The report however did not mention the way the North Koreans responded to the offer. Nevertheless, the chief nuclear negotiator Kim Myong Gil depicted the U.S. as inflexible after the talks earlier this month, blasting the Americans as unrelenting in terms of “their old viewpoint and attitude.”

Experts have explained that the North has prioritized on having suffocating U.S.-led U.N. sanctions eased prior to taking additional measures toward denuclearization. The administration of U.S. President Donald Trump has constantly said the North can only have access to “a bright future” when it first abandons its nukes.

Being a real estate magnate himself, Trump has suggested to the “great beaches” of the Wonsan-Kalma tourist area as a way Kim Jong Un, the North Korean leader has a chance to develop his country economically — if it relinquishes its atomic arsenal.

In 2018, after delivering speech in the landmark Singapore summit with Kim in June last year, Trump was effusive about area’s potential.

“I said, boy, look at that view,” he said at the time. “Wouldn’t that make a great condo? And I explained, I said, ‘you know, instead of doing that you could have the best hotels in the world right there. Think of it from a real estate perspective. You have South Korea, you have China, and they own the land in the middle. How bad is that, right? It’s great.”