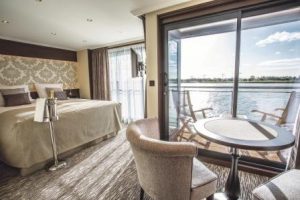 Riviera Travel triples its solo-only river cruises in Europe,  with announcement of a ninth sailing for solo passengers only. All cabins are for sole occupancy with no single supplement – saving thousands

Luxury, solo-friendly river cruise line, Riviera Travel, has announced the addition of a ninth sailing in Europe this year exclusively for solo passengers, tripling its number of solo-only departures in 2019 over last year. All cabins will be free of any single supplement.

The new solo-only sailing is a seven-night cruise on the Rhone and Saone Rivers from Lyon to Avignon in France aboard its five-star, 76-cabin river ship, MS William Shakespeare, departing on October 14, 2019. The cruise features the wine region of Burgundy, the flower-flecked meadows of Provence, the spectacular Rhone Valley, the gastronomic capital of Lyon, the Roman aqueduct of Pont du Gard and the city of Arles – once home to famed painter, Vincent Van Gogh.

Now renowned for servicing the needs of solo travellers, Riviera Travel will also offer eight other cruises for solo passengers only across Europe this year, with single travellers enjoying a cabin to themselves without the need to share with other passengers. And because each cabin only has one passenger in it on these special sailings, rather than two, single guests also enjoy the benefits of a more spacious ship.

Earlier this month, Riviera Travel also announced it had added another 187 solo occupancy cabins – each also free of a single supplement – to 23 sailings across Europe in April and May this year.

Riviera Travel, which offers inclusive, five-star cruises at fares up to 50 per cent lower than river companies more established in Australia, also offers a selection of solo-only cabins on every sailing and every ship all year long.

Riviera Travel’s International Sales Manager for Australia, Thomas Morgan, said increasing demand had led the line to announce a ninth cruise this year exclusively for solo travellers and free of single supplements. “It can be frustrating for solo travellers to find good-value river cruises that don’t come with hefty supplements. Our solo-exclusive river cruises include everything a solo traveller needs for a great holiday, which means a cabin or suite all to yourself – with no single supplement,” Mr Morgan said.

Fares on the new solo-only sailing in France on October 14 start at A$3999, including daily guided excursions, onboard meals and Wi-Fi. Fares and cabins are subject to availability.