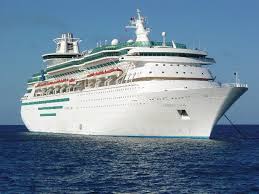 Royal Caribbean International has cancelled a planned call of its cruise ship in San Juan, Puerto Rico, amid protests against the governor in the capital of the U.S. territory.

“In view of the current unrest in San Juan, Puerto Rico, we have scrapped today’s call to San Juan,” Owen Torres, spokesman for Royal Caribbean, said in a statement to the press. “We continue to monitor the situation closely and will make adjustments as necessary to ensure the safety and security of our guests and crew.”

Thousands of protesters marched in San Juan to call for Gov. Ricardo Rosselló’s resignation. Police tried to disperse the marchers with pepper spray in front of the Fortaleza governor’s residence, which was protected by barricades.

Empress of the Seas, which was slated to stop in San Juan Tuesday, has been rerouted to Tortola in the British Virgin Islands, Torres said, and guests will receive refunds for prepaid shore excursions. Tortola was already on the itinerary as a planned Wednesday stop.

The ship left Miami Saturday on an eight-day Caribbean journey with stops planned for the Royal Caribbean’s private island, CocoCay, in the Bahamas; San Juan; Tortola; and Saint Thomas in the U.S. Virgin Islands.

Last week, two of his top former officials were arrested by the FBI on corruption charges.

Torres noted future stops in San Juan have not been cancelled but that Royal Caribbean is “monitoring the situation and will make adjustments if necessary.”