Second edition of the Global Report on Women in Tourism launched 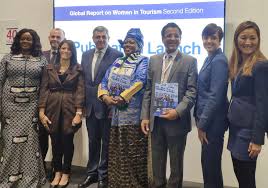 The UNWTO, in association with UN Women, The German Society for International Cooperation (GIZ), World Bank Group and Amadeus, has launched the long-awaited second edition of the Global Report on Women in Tourism.

The publication highlights the advancement that the global tourism sector has made in developing gender equality, with key case studies and statistics collated from around the world.

According to findings, majority of the tourism workforce worldwide is female. 54% of people employed in tourism are women compared to 39% in the broader economy.

However, regarding wage, there are discrepancies. Women in tourism earn 14.7% less than men compared to 16.8% in the broader economy.

Tourism offers women more opportunities for leadership roles, with 23% of tourism ministers being female compared to 20.7% of ministers overall.

The report also brings up how more and more women are challenging gender stereotypes in the sector.

In Morocco, for example, women have been issued tour guide licenses for the first time. An airline in the UK has doubled the number of female pilots and Uganda’s Hotel Owner’s Association is now lead by its first female CEO.

Speaking on these findings, the UNWTO Secretary-General, Zurab Pololikashvili said, “Tourism is leading the charge for female empowerment all over the world. Across the private and public sectors women are harnessing the potential of tourism to become financially independent, challenge stereotypes and start their own businesses.”