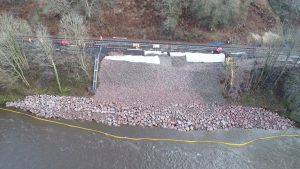 Network Rail has completed work to reopen the line between Kilmarnock and Dumfries and passenger services have now resumed (Monday March 16) following damage during Storm Ciara.

The section of line near Holywood in Dumfries & Galloway had been shut since Monday February 10 after Storm Ciara’s 90mph winds and extreme rainfall caused the nearby River Nith to erode an embankment beneath the railway.

Detailed examination of the landslip by specialist engineers confirmed that 1,700 ton of debris had slipped from beneath the railway with much of it spilling into the river and taking out a retaining wall in the process.

Since the line was closed , Network Rail engineers have worked 24 hours a day, seven days a week to remove the debris from the river, install ‘rock armour’ protection and strengthen the riverside before rebuilding and re-profiling the railway embankment.

In all 6,000 ton of stone was brought to the site and installed along the riverside and used to reconstruct and strengthen the embankment.

Michael Matheson, the Cabinet Secretary for Transport, Infrastructure and Connectivity, said, “I’m delighted that the line between Kilmarnock and Dumfries is now re-opened. Over the course of the last four weeks, Network Rail and their team have been working 24 hours a day, seven days a week to repair what was a significant landslip beside the railway line.

“I’m very grateful for the work that has been undertaken by staff over the course of the last four weeks in what has, at times, been very challenging weather.

I also recognize that this has caused an inconvenience to regular users of the line, but no doubt you’ll appreciate the nature and the scale of the challenge which Network Rail staff have faced in repairing this damage.

“I thank everyone for their patience over the course of the last couple of weeks while this work has been getting carried out. I’ve got no doubt, given the nature of the repair that’s been undertaken, that it will serve the line very well for the years to come.”

Tom Podger, Network Rail’s project manager for the reinstatement work said: “Flooding caused by Storm Ciara led to significant damage beneath the track and we needed to protect the river bank before rebuilding the embankment to stop this from happening again.

“The landslip was located in a difficult location above the river and the remoteness of the site presented a challenge in getting equipment and materials to the site.

“We have moved 6000 tonnes of rock into place to both rebuild the embankment and to form a protective barrier between the railway and the river and worked as quickly as possible to get the line re-opened for customers.