In Seychelles, nature is valued than over-tourism! 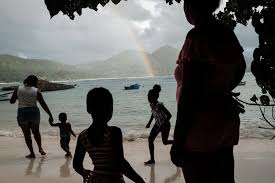 In a shady piece of land all along the immaculate white beach on Mahe Island, a radio spits out reggae and snapper sizzles on the barbecue, as Seychelloise Nareen tops up her rum and coke on time off from her job aboard a luxury yacht.

At the beach, her family is spending time during the weekend where a couple at the same time is dipping their feet into the turquoise blue waters are the only foreign tourists that can be seen.

“We don’t have mass tourism in Seychelles, and that’s great. That is how we want it,” says Nareen, 32, who requested that her full name should not be published.

Nonetheless, like majority of citizens, she is dependent on tourism for her livelihood, which makes up more than 60 percent of GDP in the Seychelles, the only country in Africa considered “high income” by the World Bank.

The Indian Ocean archipelago, a chain of 115 islands, is an embodiment for luxury vacations, Instagram-perfect beaches and has achieved a massive reputation as an idyllic spot for honeymoon.

However, it is going through a tug-of-war over the way to keep the financial conditions growing, while safeguarding its fragile ecosystem.

“More tourists means it’s better for the economy, but it’s not the only thing that comes into play,” Nareen says.

High-end tourism, from Europe mostly, helped Seychelles to protect itself from the edge of monetary ruin after the 2008 economic crisis.

In the decade that followed, visitor numbers doubled to about 360,000 in 2018, nearly four times the population of the country.

But at present Seychelles is struggling with the number of visitors it can accommodate realistically. An official research commissioned into the matter is about to start soon.

In the period in-between, the government placed a suspension in 2015 on the construction of large resorts on the three main islands of Mahe, Praslin and La Digue.

It wanted both to guard the environment and hearten up the growth of smaller, locally-run hotels.