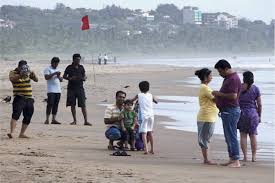 The sharp depreciation of the rupee against all major currencies is helping India’s inbound tourism to grow while outbound travel will be hit.

However, the decline of rupee would be bad for outbound travel, he said. It is expected that this segment will have negative growth this year. The impact will be felt later.

While most of the Indian travellers had taken note of the falling rupee, they had not changed their international travel plans, said Karan Anand, Head, Relationships, Cox & Kings Ltd.

Karan Anand, Head, Relationships, Cox & Kings Ltd said that in last eight months the rupee has fallen over 8% vis a vis the dollar. However, this has had little impact on people taking trips to dollar destinations. If the rupee may weaken further against the dollar, travellers may trade down — like reduce the duration of travel, stay in four-star accommodation and cut back on shopping to cut down on expenses while on the trip.

However, it is very rare that travellers cancel or reassess their choice of overseas destination that has been planned for months. Due to the overall strength of the rupee against the euro Indians would likely prefer to visit Europe.