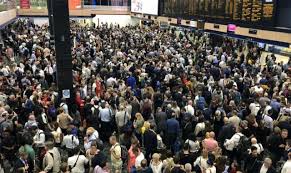 Due to an earlier signal failure at London Euston station thousands of passengers are facing evening disruption.

This afternoon all services from London’s fifth busiest station were suspended after a signaling fault.

According to National rail all lines have since reopened and services were getting back to normal.

Although the disruptions will last until 8pm and trains may get cancelled, delayed by up to 60 minutes or revised.

In other stations around the country trains have been cancelled, this also includes Manchester as they were unable to travel to Euston.

At the Chiltern Railways, London Northwestern, London Underground, Thameslink and Southern services customers for stations to Watford Junction can avail their ticket.

The train operator also announced that passengers travelling on Virgin Trains can use their tickets for travel tomorrow or avail a full refund.

Road transport for passengers is being sourced by the London Northwestern which runs services from the capital to northwest England.

Passengers with a ticket to travel in and out of Euston today should check National Rail.

Incase the journey is delayed for more than 30 minutes passengers will be able to apply for compensation.

Any passenger with a ticket to travel in or out of Euston today should check National Rail before travel.