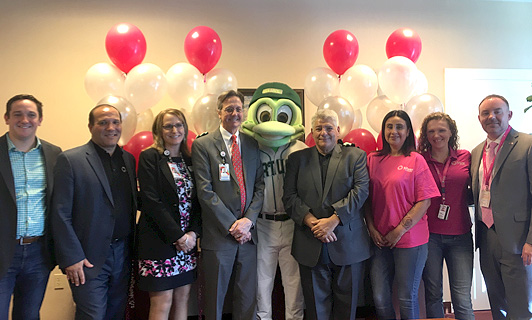 To affirm its commitment to the new service, Silver Airways has ‘inked’ a deal – with official commemorative livery featuring joint branding to be released soon – as the official airline of the MiLB’s Daytona Tortugas baseball team. There couldn’t be a more perfect match than the airline who offers the most routes within Florida and Florida’s State League’s Daytona Tortugas.

To celebrate the new nonstop service connecting Daytona Beach and South Florida, Silver is offering introductory fares from $59* available at SilverAirways.com for a limited time for travel on or before May 22, 2019, for ticketing before December 17, 2018.

In addition, Silver offers convenient connections from Daytona Beach beyond Fort Lauderdale to Key West and many popular Bahamian Family Islands, including Marsh Harbor and Treasure Cay in the Abacos, Cat Island, Eleuthera’s Governor’s Harbour and North Eleuthera, Freeport, and George Town in Great Exuma with every day low fares as low as $107*.

“As a Daytona-area resident, I can’t be more excited for Silver Airways to share all the riches our community has to offer,” said Silver Airways Senior Vice President Kurt Brulisauer. “A few of my country music favorites say it best. Whether it’s Daytona Beach on spring break, Coronas in Daytona on summer nights where it’s wild and it’s free, the tiki bar is open and there’s a full moon over Daytona Beach. Sweet iced tea and Jerry Lee in Daytona Beach, that’s what gets to me, I can feel it in my bones. And of course remembering Number 3.”

“Being a turtle, it used to take me years to get to Fort Lauderdale,” said Daytona Tortugas Mascot Shelldon. “Now, with Silver Airways as our official airline, I can get there in an hour.”

Silver Airways offers guests the ease and convenience of seamless booking, ticketing, and baggage handling with connections to dozens of destinations that are available via the airline’s codeshare partnerships with United, JetBlue, and Avianca, as well as interline ticketing partnerships with American, Delta, Air Canada, Alaska, ANA, Bahamasair, Hahn Air, and Azul.