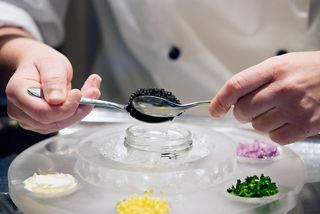 As part of the largest investment in the company’s history, the cruise line is growing and improving its ultra-luxurious fleet of ships. In addition to Silver Moon and Silver Dawn, which were announced prior to the launch of Project Invictus and are expected to join the fleet in 2020 and 2021, respectively, Silversea has ordered three new ships as part of Project Invictus: Silver Origin, which will be primed for cruising in the Galapagos Islands, and two Evolution-class ships. Extensive refurbishments were also made to Silver Whisper in December 2018, while an augmented refurbishment of Silver Wind – planned for the summer of 2020 – will improve the ship’s cruising versatility, thanks to a strengthened ice-class hull and the addition of Zodiacs.

A number of enhancements are being implemented to upgrade the cruise line’s already exceptional culinary offering. In addition to being welcomed by chilled champagne in their suites upon embarkation, guests always have complimentary sustainable Ars Italica caviar at their fingertips 24 hours per day, thanks to an enhanced caviar offering. Available both in-suite and in all restaurants throughout Silversea’s ships, complimentary caviar is offered to guests by the tin and as a garnish for meals, such as tartare and lobster. Preserving a centuries-old tradition, Ars Italica is a leading producer of caviar and uses sustainable techniques to farm the highest-grade product and support the repopulation of sturgeon to northern Italy. Caviar is among the top-grade ingredients that distinguish Silversea’s onboard canapé selection, along with foie gras, truffle, tiger prawns, and macarons.

The quality of ingredients is as high as ever, yet guests’ preferences are better anticipated with increased quantities: across Silversea’s fleet, around 180,000 bottles of champagne and 2,400kg of caviar are consumed by guests each year—a 340% increase of the latter. Approximately 66,100kg of lobster is consumed yearly, along with an increased abundance of other seafood delicacies, 66,100kg of tenderloin steak, 33,100kg of striploin steak, and 58,000kg of fresh berries, including strawberries, blueberries and raspberries. Guests are particularly enjoying the remarkable variety of meats on offer, from the ‘Italian Piemontese’ served in the Italian La Terrazza restaurant to the ‘French Limousine’ served in the French La Dame restaurant and the ‘American Angus’ served in Atlantide.

Comprising between 50 and 70 labels, the largest complimentary wine list at sea has also been upgraded, as Silversea adds more variety to its industry-leading selection, including more regional options to immerse guests in the culinary culture of sailed regions. On Silversea ships, more than 670,000 bottles of wine are consumed each year, including the most reputable labels from iconic wine producers and lesser-known bottles of extraordinary quality, as selected by Silversea’s expert Wine Ambassador. Every major wine grape is represented, as part of a collection that comprises both ‘old world’ and ‘new world’ wines, from champagne through to dessert wines. Many premium wines are also offered alongside the complimentary list, at unusually competitive prices.

Another enhancement made possible by Project Invictus, offered aboard Silversea’s expedition ships only, guests on expedition voyages will receive a complimentary DVD package that will depict the highlights of their voyage. Produced by a professional onboard videographer, the DVDs will showcase the immersive experiences unlocked by the cruise line, capturing unforgettable memories for Silversea’s guests.

Moreover, the cruise line’s television programming has been upgraded, meaning its in-suite entertainment is among the best at sea. As part of the enhancement, guests will now be able to watch the most in-demand live football and basketball fixtures, among other significant broadcasts. In addition to approximately 100 blockbuster movies, including roughly 20 new releases each month, 90 hours of tailored destination and documentary content is now enjoyed by guests, plus a further 150 hours of television shows.

“I am very pleased to hear such positive feedback on Project Invictus from guests,” says Roberto Martinoli, Silversea’s CEO. “I am receiving emails on a daily basis from guests who appreciate the enhanced offering, as well as the exceptional service for which Silversea is renowned. It is clear that Project Invictus has made a significant impact since its implementation. I take pride in being the CEO of a cruise line that is so committed to the enjoyment of its guests.”