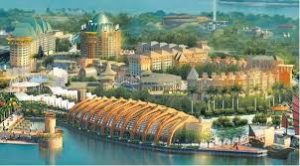 In a joint statement on Wednesday evening (April 3), the authorities, which include the Ministry of Trade and Industry, said that the $9 billion investment is almost two-thirds of the IRs’ initial investment of about $15 billion in 2006.

At MBS, a new 1,000-room luxury hotel tower will be built next to its existing three towers. It will include only suites. A new entertainment arena optimised for concerts is also being planned, with the aim of drawing A-list artistes. MBS will also spend about U.S. dollars 4.5 billion on the expansion, which will span about eight acres of what is currently state land.

New spaces for meetings, incentives, conferences and exhibitions (MICE) will be created at both Resorts World Sentosa (RWS) and MBS.

MICE facilities is a part of expansion by Singapore integrated resorts.

RWS said that its $4.5 billion development investment will add more than 164,000 sq m, about half of its current gross floor area. This will include a new waterfront lifestyle complex housing two hotels, retail spaces and eateries. There are also plans for an unmanned shuttle to run along the Sentosa Boardwalk, which connects the resort island with VivoCity.