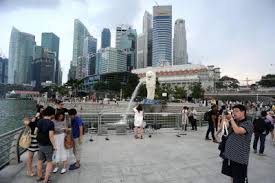 The tourism sector is most likely to retain its growth momentum in the second half of this year, supported by increasing travel demand and tourist flows from markets like as China and India.

However, risks like full-scale trade war could dampen sentiment.

Overall, visitor arrivals for January to April are up nearly 7 per cent year-on-year to 6.18 million, as per preliminary estimates from the Singapore Tourism Board (STB).

Visitor numbers from China, which is Singapore’s biggest source market, continue to move ahead with an 11 per cent jump to 1.22 million, while arrivals from India surged 19 per cent to 417,400.

This year, the STB anticipates visitor arrivals to increase by 1-4 per cent, and tourism spend by 1-3 per cent. Blockbuster events in the first half of the year included Herbalife SEA Extravaganza 2018 and Money 20/20 Asia 2018, while Industrial Transformation Asia Pacific and the Amway India Annual Leadership Summit would take place in October and December, respectively.

According to the World Travel and Tourism Council (WTTC), the direct contribution of the travel & tourism sector to Singapore’s GDP was 4.1 per cent last year.

Ms Ling expects that regional tourism activities will continue to grow in the second half of this year, driven by an insatiable appetite for outbound travel and an emerging middle class in China.