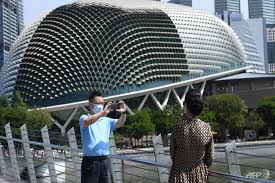 Singapore has also been affected by the outbreak of the coronavirus that causes COVID-19 among a host of other nations, as the country’s Health Ministry announced on Monday that there were 77 confirmed cases of the virus and 24 people had been discharged from the hospital.

The outbreak has also affected the country’s tourism. The Singapore Tourism Board reported that 19.1 million tourists visited the country in 2019, a 3.3 per cent increase from 2018. However, the number is forecast to drop about 25 to 30 per cent this year.

“Every day, Singapore loses 20,000 tourists from all entrances [following the virus outbreak],” said John Gregory Conceicao, Southeast Asia executive director of the Singapore Tourism Board, during the Year-in-Review 2019 and Media & Trade Gathering event on Tuesday in South Jakarta.

Mohamed Firhan Abdul Salam, Indonesia area director of the Singapore Tourism Board, said at the same event that Singapore currently applied travel restrictions for tourists from China, including on direct flights to and from China. “It’s among the measures to contain the situation in Singapore,” Firhan said.

Despite the outbreak, Firhan said Singapore still continued with “business as usual”. He explained that thermal scanning had been performed in all entrances to Singapore and surgical masks were provided for the public, especially for those who are sick.

The country also has implemented contact tracing, meaning that those who have interacted with a coronavirus-infected person will be traced for further check-ups.

“We suggest travellers practice personal hygiene: wash your hands, wear masks if you’re sick and go to the doctor if you feel any symptom of fever and coughing,” Firhan said, adding that all tourist destinations in Singapore were still open to the public.

In regard to the country’s recovery, Conceicao said it would take longer than the recovery period from the Severe Acute Respiratory Syndrome (SARS) outbreak in 2003, which took around five months.

“Maybe it will take five to six months. We’ll see whether we can recover by then,” he said, adding that the board planned to team up with travel agents, airlines and online travel agents to promote Singapore when the recovery period ends.