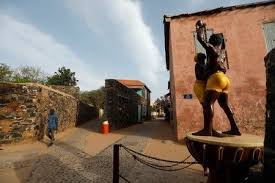 At Assin Manso, a group of visitors removed their shoes and walked barefoot down a path to the muddy river that runs through a bamboo grove. Together they placed their hands in the water, then waded in to offer prayers in thanks for the opportunity to return.

In a clearing at the turnoff to Assin Manso, a billboard depicts two African slaves in loincloths, their arms and legs in chains. Beside them are the words, “Never Again!”

This is “slave river,” where captured Ghanaians submitted to a final bath before being shipped across the Atlantic into slavery centuries ago, never to return to the land of their birth. Today, it is a place of sombre homecoming for the descendants of those who spent their lives as someone else’s property.

The popularity of the site has swelled this year, 400 years after the trade in Africans to the English colonies of America began. This month’s anniversary of the first Africans to arrive in Virginia has caused a rush of interest in ancestral tourism, with people from the United States, the Caribbean and Europe seeking out their roots in West Africa.

“Ten years ago, no one went to the slave river, but this year has been massive,” said Awuracy Butler, who runs a company called Butler Tours.

She said business has nearly doubled this year, which has been touted as the Year of Return for the African diaspora tracing their family history. The number of tourists has forced her to hire more vehicles, she said.

“Everyone wants to add the slave river to their tour,” she said. The coastal forts where they spent their last days in Ghana in suffocating conditions are also increasingly popular, she said.

The increase in tourism has been an economic boon for Ghana, which unlike other West African countries has aggressively marketed its “heritage” offerings for the anniversary.

With an average spend of $1,850 per tourist, the tourism authority expects this year’s revenues to top $925 million, a 50% increase from 2018, which it hopes to sustain over the next three years at least.

The amount is dwarfed by Ghana’s $2-billion cocoa industry but is considered essential in a country of 28 million people who mostly live in poverty.

Anthony Bouadi, a tour guide at Cape Coast Castle, a fortress where the captives were kept until they were sent on ships over the Atlantic, said he believes the site will change the lives of those who visit.

The surge of visitors is part of a global phenomenon: Airbnb data shows a five-fold increase in people travelling to places connected to their ancestry worldwide since 2014.

Ghana has long encouraged its diaspora to return and has strong links with the African American community. Malcolm X visited in the 1960s and spent time with the American poet and civil rights activist Maya Angelou, who lived there at the time. The prominent black writer and activist W.E.B. Du Bois settled and died in Ghana. Since, many other ordinary African American families have returned.

But questions remain about whether the heightened interest in Ghana can be sustained after the anniversary. Bad roads, a cumbersome visa application process and expensive flights could stem the number of visitors in the long term.

On most tours, Assin Manso marks one of the final stops on a country-wide swing in which groups take part in Ashanti rituals, meet local chiefs and trace the gruelling route captured slaves took from the country’s northern hinterland out to the coast.

“I have seen a lot of people – they really are coming,” said Bouadi, the guide at the castle, who now does up to six tours a day compared with three last year. Each tour has doubled in size, he said, to around 40 people.

“Tourism organisations in Ghana are hiring more people,” he said. “If people earn more, they can pay for school fees; it boosts the local economy and reduces poverty.”