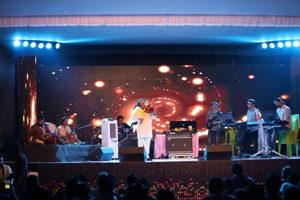 The fifth edition of the Kerala Literature Festival (KLF 2020) in association with Kerala Tourism is set to be held from the 16th to 19th of January 2020 at Calicut. With over Four Lakh attendees, KLF 2020 will be the largest cultural gathering in South India and the fastest-growing literature festival on the continent. Set along the shores of the Arabian Sea by the beaches of Calicut, the festival will bring readers and writers together for inspiration, entertainment, and discussion.

“Kerala Literary Festival is different from every other literary festival in the world as this is entirely a people’s festival. The focus theme for KLF 2020 will be environment and climate change. The Guest Country this time is going to be Spain represented by a team of twenty artists, writers, and journalists. The Indian language in focus is Tamil with ten writers. We have five participants from China, and many from Great Britain, Slovenia, Egypt, Ireland, South Africa, Sri Lanka and of course India” said Ravi Deecee, Chief Facilitator.

The fifth edition of KLFwill also see independent publishing consultant HemaliSodhi join the organizers in the capacity of Festival Advisor. Over the Years, KLF has seen unparalleled growth amongst literature festivals in the continent and this edition promises to be the grandest of all with the introduction of two new initiatives: The KLF Literature Awards in the categories of Fiction, Non Fiction, Popular Science, Travel and a grand prize for the Best Book in Malayalam, and the announcement of the Vagamon Residency, a fully supported residency for writers and artists.

KLF 2020’sprogrammeintroduces new formats like debates, straight talk, book discussions and reader’s sessions besides ten minutes slots for the audience to introduce an original idea. The festival offers talks, debates, and discussions on a variety of themes ranging from literature, history, science and journalism to cinema and environment.

Satchidanandan, Festival Director said that Gandhi and environment, the Gadgil Report in the context of Kerala’s floods, organic agriculture and the impact of rock mining, deforestation and sand mining on our environment are some of the themes that will be taken up for analysis and debate. Islam and Women, the entry of women in Sabarimala, the Ayodhya Verdict, the emergence of community dialects and tribal tongues as literary languages,  the new short story, new versions of Don Quixote, the novels of Miguel Delibes, cartography, new discoveries about the early Indians, Robotics and the future of mankind, the role of social media in an opinion formation, current trends in art, music, and caste,  literature in the time of trauma etc are some of the themes being discussed at the festival.