South’s olive leaf to N. Korea may be a complicated tourism gesture 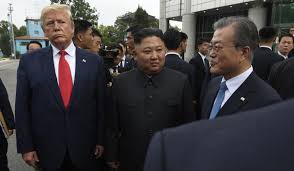 South Korea’s efforts to resume tourism with the North is aimed at resetting border ties, but must overcome Pyongyang’s skepticism and chart a careful course around U.S. efforts to pressure leader Kim Jong-un into eliminating his nuclear arsenal.

South Korea’s Unification Ministry unveiled plans this week for individual tours in the North’s major tourist sites. The effort is meant to appease Pyongyang, which has criticized the South for lacklustre progress after their leaders agreed to restart economic cooperation in 2018.

Tourism is not subject to international sanctions imposed over North Korea’s nuclear and missile programs, and the proposals are designed to avoid breaching U.N. bans on bulk cash transfers and joint business ventures with North Korea.

Seoul says the United States knows of its plans, and South Korean officials are seeking to sound out Pyongyang about them, albeit quietly given the sensitivity of relations, officials said.

After Moon called for reopening North Korea tours in his New Year speech, Seoul diplomats led by nuclear envoy Lee Do-hoon visited Washington. U.S. officials, including Deputy Secretary of State Stephen Biegun, reacted well to the idea, a diplomatic source told Reuters, speaking on condition of anonymity because of the sensitivity of the matter.

“Biegun practically gave a blank check. But of course it doesn’t mean that they want to see a million dollars written down on it right away,” the source said, referring to sanctions concerns.

In November, Pyongyang threatened to bulldoze “backward, shabby” South Korean tourist facilities at its Mount Kumgang resort. At a key policy-making meeting last month, it vowed to overcome economic difficulties on its own through “an offensive for frontal breakthrough.”

“It would be a policy shift if the North accepts it,” a South Korean official told Reuters, referring to the tourism plan. “And frosty relations aside, they don’t really like South Koreans roaming through their country.”

“I’m not sure if restarting tourism with the South is in line with their ‘frontal breakthrough’ campaign, but there can always be a surprise, and some of the plans such as invitation-based visits are already taking place on a limited scale,” said an official at a South Korean company previously involved in the initiative.

South Korean officials and those who are close to Moon have increasingly grumbled about Washington’s position that it will maintain sanctions until Pyongyang takes substantial steps toward denuclearisation.

During the recent meeting led by Biegun and Lee, both sides shared concerns the United States was being perceived as a potential obstacle to inter-Korean ties, the diplomatic source said.

“So we’ll try to give the impression that the consultations are working and helpful, and we can also speed up the way we handle things,” the source said on condition of anonymity because of the sensitivity of the matter.

Kumgang tourism was a joint venture, now banned by sanctions, that provided a rare source of cash for Pyongyang worth millions of dollars a year.

Seoul’s new proposal includes not only Kumgang but also new areas built up under Kim, including the Wonsan coastal tourist zone, the Samjiyon alpine town and Yangdok hot spring resort.

Tags: N. Korea may be a complicated tourism gesture