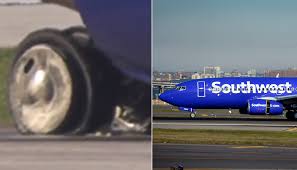 Southwest Airlines had to evacuate an approaching flight at Chicago’s Midway International Airport after a hydraulic issue cropped up upon landing, resulting in blown tires, media channels reported.

However, there were no injuries.

Online flight records from FlightAware show the flight, No. 4448 departing from Austin, arrived about 35 minutes late, landing at around 9 a.m. and spending about 45 minutes on the runway before arriving at a gate.

“Following a safe landing, the 137 customers and a crew of five used airstairs to deplane the aircraft and board buses for the main terminal,” Michelle Agnew, a spokesperson for Southwest, said in a statement, confirming that the problem had to do with a system that powers the landing gear.

“We apologise to all customers onboard for the inconvenience and are working with any connecting customers whose onward travel plans changed as a result of this event,” Agnew added.

Passengers compared the sound and feeling of the landing to what one might experience when a tire blows on a car.

“We landed kind of hard. I was actually dozing off and it startled me awake,” passenger Sam German told media. “We just heard something pop and then like a rattle. It sounded like a flat tire basically,” he added.

Another passenger, Jill Ariola, told the outlet, “If you ever had a flat tire, it was the same type of deal. You kind of hear it flap flap flap, and then we just listed a little bit. The pilot did a great job. There was no swerving; there was no drama.”