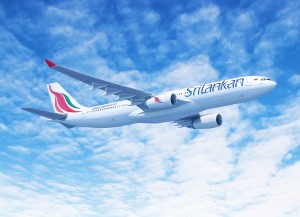 Melbourne Airport hit a six with the service being the first time a carrier has connected Melbourne to Sri Lanka on a non-stop service.

Passengers travelling on the inaugural flight were treated to performances by traditional Sri Lankan dancers on their arrival into the world’s most livable city, while traditional music played in Melbourne Airport’s International Terminal for guests.

“We are thrilled to launch SriLankan Airlines daily non-stop service between Melbourne and Colombo adding much-needed frequency into such a key route,” said Mr Gandy.
“The connection between Melbourne and Sri Lanka is strong; according to 2016 census data there are more than 55,000 Sri Lankans living in Victoria. That local population has grown by some 27% since 2011.

“Thanks to SriLankan Airlines we are able to better connect family and friends through this non-stop service. With so many cultural experiences to choose from in Sri Lanka, we’re confident the route is going to be a busy one with tourists as well.

“Colombo is also the perfect starting point for any holidaymaker wanting to travel to the Maldives, which is about an hour away on a connecting flight. There are also plenty of options to connect further to Indian cities via SriLankan Airlines, as the carrier connects to 14 Indian destinations through the Colombo route.”

“Australia is home to one of the largest Sri Lankan expatriate communities, many of whom reside in and around Melbourne, and our two countries share many interests and passions – making for a rich, cultural exchange in the way of tourism.

“We look forward to providing our award-winning service, delivered with world-renowned Sri Lankan warmth and hospitality, as Australians travel to Sri Lanka, India, the Maldives and beyond,” Mr Ratwatte said.

SriLankan Airlines’ daily service from Melbourne to Colombo will operate on an A330-200 departing at 4:55pm (local time) each day.

“Airlines have shown confidence in Melbourne Airport by adding new routes and services. We are now flying to more destinations than ever before, which is exciting for our travellers,” said Mr Gandy.

“Travel to and from Melbourne is booming, last year we welcomed 35 million passengers and that number is expected to rise to more than 60 million by 2033.

“To cater for this growth we are investing in all areas of our airport amenity and capacity including our proposed third runway to maintain and grow this essential piece of infrastructure in Victoria.

“We are also unveiling a number of key projects in 2017 that will streamline the traveller process including an eighth baggage carousel and self-service check-in kiosks. Melbourne Airport’s T2 Luxury Precinct will also be complete by the end of the year.”