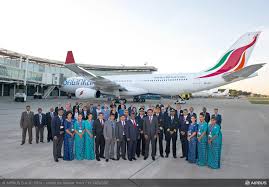 By flight data analysis company Flightstats.com, SriLankan Airlines was named one of the most punctual airlines in the world in the month of September in the main categories of ‘Global Airlines’ and ‘Major Airlines.’

An astonishing 91.37 percent of SriLankan Airlines’ flights in September were right on time, as per an analysis by Flightstats.

Flightstats evaluated the data of almost 41 carriers in the category of ‘Global Airlines’ across Europe, North America, Asia, the Middle East, and South America – including majority world’s largest and most impressive airlines. Airlines are categorized among four sections – the others being Regional Airlines and Low Cost Carriers – with few appearing in more than one category.

In the ‘Global Airlines’ category, the punctuality of SriLankan Airline was far ahead of the Delta Airlines that was in second place with 86.74 percent flights on time, as the third place went to the Japanese airline ANA with 86.61 percent on time.

In the ‘Major Airlines’ category, SriLankan was easily to the lead of India’s IndiGo that was in second position with 86.92 percent of flights being on time, and ANA which was third.

SriLankan’s outstanding performance came on the heels of the airline having introduced its dynamic new ‘Ready to Fly!’ programme at the onset of September to improve its world-renowned customer service by offering increased punctuality levels of its flights around the world.

The consistently high level of on-time performance, SriLankan Airlines and its world position is the result of a structured process that keeps an eye and coordinates the performance of all departments and individual staff members responsible for different aspects of its operations. The degree of attention and importance given on punctuality monitoring is unfailingly high with zero tolerance for slips in the process.