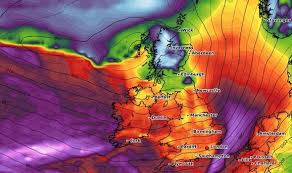 The first storm of the season named Atiyah  has made entry into the country on late Sunday and going into Monday. According to the Irish weather service made landfall and moved across the country.

The strong gusts have the potential to damage buildings threatening travel disruption and power cuts.

For the west coast of Wales and the South West a  yellow severe weather alert has been issued. The forecasters predict that gales will cause transport delays and will run the risk of damage to some buildings.

From 3pm on Sunday till 9am on  Monday , the warning remains applicable.

With gusts of up to 57mph overnight Western parts of Northern Ireland and Scotland are forecast to be hit.

Kernow Weather Team has already recorded gusts of 96mph at its station in Illogan.

Thanks to the gale force winds, hundreds of homes have been left without power and at one point almost 1,400 were cut off in the Camborne area and another 1,200 in Probus area.

Most of the properties in St Ives and Mullion areas were also affected.

The strong winds will follow torrential downpours and the Kernow Weather Team has also issued a travel warning.