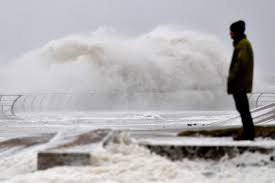 As storm Dennis is due to bring a month’s volume of rain in just 24 hours Half-term holiday getaways will be thrown into chaos this weekend.

Around 120-140 mm of rain has been forecast for parts of the south west, south east, north west and South Wales, with amber weather warnings issued.

Families have been advised to consider cancelling their travel plans as the Met Office says there is a serious risk to life with deep, fast flowing flood water expected to affect large parts of the UK.

Trains are likely to be cancelled and roads are likely to shut, as Britain deals with a second storm system in a week. Already, Southeastern is warning that it may need to put speed restrictions on some routes on Saturday and Sunday due to the weather.

As well as transport disruption, homes and businesses are likely to be flooded, and there is “a good chance” that some communities are going to be cut off by flooded roads, according to the Met Office.

Storm Dennis will arrive just days after Storm Ciara, which brought winds of up to 97mph and saw three people die.

“The difference with Dennis and Ciara is that Dennis will bring a lot more rain and a little bit less wind,” said Bonnie Diamond, from the Met Office.

“Saturday and Sunday we will see a lot of rain and that’s why we’ve put out Amber warnings.”

The average rainfall for the entire month of February in the North West of England is 97mm, while in the South West it is 98mm. Those areas can expect to see more than that over the course of Saturday afternoon and Sunday morning.

“Given that it’s already wet and we have seen flooding, this is going to be a very hazardous spell,” said Ms Diamond.

“With half term travel ahead, trips to Dartmoor, the Yorkshire Dales or other holiday spots affected by the rain may have to be cancelled or changed.

“There is very much a risk to life with fast flowing and deep floodwater.”

Guidance says that people worried about flooding should check the Environment Agency website for updates.

Northern Ireland is covered by a warning of rain from midnight until 8am on Thursday morning, with forecasters saying this could bring transport disruption and flooding to some homes and businesses.

Another warning of snow has been issued for the north west of England from 2am to 11am on Thursday, which the Met Office said could again affect travel and cut off rural communities.

There is also a risk of blizzards over the high grounds of southern Scotland on Thursday morning which will push eastwards and clear away into the afternoon, the Met Office said.

Elsewhere, it will be windy with heavy showers across many parts of England and Wales, with some hail and thunder mixed in.

On Saturday, three warnings of wind and rain cover all of England, Wales and southern Scotland for most of the day.

Met Office meteorologist Alex Burkill said Storm Dennis, the fourth named storm of the 2019-20 season, would bring severe gales and heavy rain that will push east across the country.

Saturday is expected to be “the most hazardous day”, he said.

“Whilst it’s going to be very windy, they do look like they will be a touch down to what we saw with Storm Ciara,” he added.

Strong winds and heavy rain will still be present on Sunday, with the whole of the UK covered by yellow weather alerts.