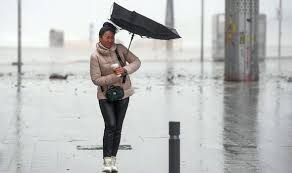 The death toll from Storm Gloria that swept through parts of Spain earlier this week has gone up to nine. On Wednesday authorities reported five more fatalities as a result of Storm Gloria, which began battering the north and east of the country on Sunday. Three of the victims died in the Valencia region and two in the south-eastern Andalusian province of Almería. Spanish rescue services are also searching for four missing people, including a British national.

Although Storm Gloria had moved north by Wednesday afternoon, a weather alert remained in place in parts of Aragón, where 3,600 people are still without electricity due to downed power lines. And in Girona, the Onyar river was close to bursting its banks.

Travel was affected as the dangerous weather conditions forced Alicante airport to halt hundreds of flights. Numerous roads were partially closed off, including the busy AP-7 highway linking eastern Spain with France. The storm also lefts thousands without power and plenty of schools were shut down..

Catalonia, the Valencia region and the Balearic Islands have been particularly affected by the unusual weather system, which was still bringing heavy rain to parts of Catalonia on Wednesday as it moved towards southern France. Parts of Alicante province had rainfall of up to 600mm on Monday, and winds gusted up to more than 100km/h.

In the Valencia region, authorities on Wednesday reported that a homeless man died during the night in Carcaixent (Valencia), while a woman was crushed in Alcoy when her house collapsed this morning; and police have found the body of a man who went missing after trying to cross a flooded spot in his car on his way from Benidorm to Callosa d’en Sarriá (Alicante).

In Almería province, in Andalusia, the death on Monday of a man who was sleeping in a park has been officially attributed to the stormy conditions, as the victim died of hypothermia. And a grower from Níjar (Almería) died after getting trapped inside his greenhouse during a hailstorm, the local police reported.

The Catalan firefighting service on Wednesday morning reported that a man in his eighties who went missing in Begues, in Barcelona province, has been found in a wooded area, “conscious but disoriented.”

Another man is still missing after reportedly falling into the sea in the port of Palamós (Girona) as he attempted to moor a boat. Rescue services are searching for another individual who was last seen canyoneering in Sóller, Mallorca. Two more people, including a British citizen, are unaccounted for in Ibiza.

Some coastal towns have been covered by white foam, creating unusual scenes that the Catalan Water Agency (ACA) said are due to “the presence of surfactants derived from the breakdown of organic matter found naturally” in the sea. The combination of strong waves and these foaming agents have covered the streets of Tossa de Mar (Girona) and Jávea (Alicante) with white bubbles. “Even the older residents I have talked to say they had never seen anything like it,” said Tossa mayor Imma Colom.

The city of Valencia had the highest wave on record at 8.44 meters, amply surpassing the previous mark of 6.45 meters set during the storm of January 2017. In Alicante province, the sea level rose by 1.5 meters, ravaging beaches and seafront promenades in Jávea, Calpe, Denia, Benidorm and other popular tourist destinations.

Tags: plans as it leaves nine dead in Spain