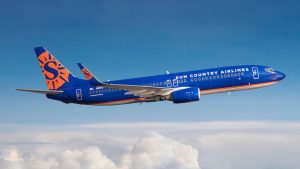 Sun Country Airlines will begin service from San Francisco to Hawaii on May 18 for the peak summer season, bulking up its service to the island state just as Southwest Airlines Co. plans to jump into the market.

Sun Country also flies to Honolulu from Los Angeles and Portland, Oregon, with its fleet of Boeing Co. 737s.

The Hawaii service was one of 19 new routes Sun Country announced today in what it called the largest network expansion in its history.

The carrier will add eight new routes from Minneapolis, three from Las Vegas and Nashville, Tennesse, and two from both Dallas-Fort Worth and Portland.

The airline has sought to become an ultra low-cost carrier with the flexibility to adjust its route schedule to exploit increased demand  and revenue opportunities during peak travel seasons.

In winter, Minnesota-based Sun Country focuses on warm-weather destinations such as Florida, Mexico and the Caribbean.