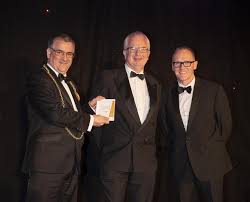 A dale caravan park and a B&B complex at Middleton-in-Teesdale were among the thriving businesses at the North East Tourism Awards, arranged at Newcastle Civic Centre previous week.

In the Holiday Village of the year category, Doe Park Caravan Park, near Cotherstone, was the gold winner. Also, Brunswick House, in Middleton, struck gold in the B&B of the year section.

The caravan site at Doe Park was introduced more than 30 years ago by Keith and Muriel Lamb.

Currently, the park and farm is managed by Mr. and Mrs. Lamb’s son Stephen and his wife Alison.

Sadly, due to farming commitments and the impending arrival of a calf, they were not capable to take part in the presentation.

Brunswick House has been managed by Andrew and Sheila Milnes since 1989 and holds a four star rating from Visit England.

Mr Milnes stated that it was the first time the B&B had entered the awards.

“We were surprised and delighted to win gold.

“We are delighted to be recognised as not only being one of the best bed and breakfasts in Teesdale but also throughout the region. Sarah Stewart, chief executive at the NewcastleGateshead Initiative, said: “This year we received a record number of applications and all the categories were tightly contested.

“From our thriving city centres through to our beautiful coastline and stunning countryside, the tourism sector in the North East continues to flourish and grow.”

“Next year, among other events, we will welcome the World Transplant Games and European professional club rugby finals to the region.”