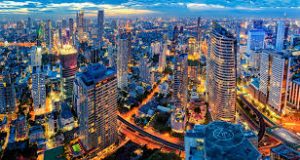 Thailand must bring out a master plan to modernize its travel and tourism infrastructure for continuous growth in its tourism revenue in the next decade.

According to the ‘Thailand Towards 2030: Future of Travel & Tourism’ report, a number of the country’s airports are surpassing their capacity and popular destinations are starting to show the impact of ‘over’ tourism, and these could limit the rate of future tourism growth if not addressed immediately.

The report identifies four key priority areas for Thailand in the next decade – increasing airport capacity; improving inter-modal air-to-city links; scaling up public-private partnerships to improve the efficiency of inner-city transport networks and reducing ‘over’ tourism. However, all these will depend on the implementation of smart technologies.

Thailand received a record 38.27 million tourists in 2018 and Thailand’s Tourism Ministry expects that number to be even higher this year, driven partly by rising incomes across the Asia-Pacific region. However, the country’s airports will also need to change how passengers move through the terminal thereby increasing their capacities and fully profit from this opportunity in the next decade.

“If tourism continues to grow at its current rate, I would expect Thailand’s airports to hit capacity even sooner than is currently forecast. Physical expansion is helping to ease some of the strain, but smart technology will also be vital to increase the number of passengers that Thailand’s airports can accommodate in the near future,” said Dr. Mario Hardy, Chief Executive Officer, PATA.