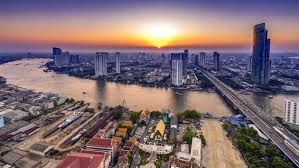 More than a year ago, five-star hotel, the Anantara Siam, with its gilded murals and landscaped courtyards, cost $150 a night, including a royal breakfast buffet. Even the most expensive souvenir in town, an elephant figurine with inlaid mother of pearl, cost less than a typical outing to McDonald’s in New York.

However, according to a visualization of recent UNWTO data, Thailand outranks every other nation in Asia when it comes to tourism spend.

Last year, Thailand collected $57 billion in international tourism receipts, nearly doubling Macao ($36 billion), Japan ($34 billion), Hong Kong ($33 billion), and China ($33 billion). Globally, the only countries that out-earn Thailand in terms of tourism dollars are France ($61 billion), Spain ($68 billion), and the United States, taking the gold medal, at $211 billion. Foreign arrivals could hit 40 million next year, which is more than half the country’s population.

“There’s no question that historically Bangkok—and Thailand in general—has always been perceived as a value destination,” said John Blanco, the general manager of the forthcoming five-star Capella Bangkok, opening next spring with 101 suites facing the Chao Phraya River. Blanco added, “But there has been a real effort to shift that perception.”

MasterCard’s annual Global Destination Cities Index recently ranked Bangkok as the most-visited city in 2017 for the third year in a row. The study indicates that travellers shell out $173 for a day in the Thai capital, compared to $537 in Dubai or $286 in Singapore. This year, it forecasts travellers will spend an additional 14 per cent.