The three top stories at ITB Berlin on Thursday, 8 March 2018 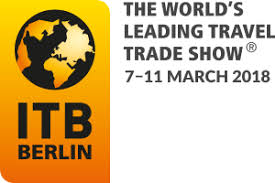 China is the tourism market of the future. It is probable that by 2020 the Far East will account for the majority of tourists visiting Europe. At the event previewing ITB China 2018 David Axiotis, the project manager of ITB China, provided a foretaste of what the second edition of ITB China in Shanghai had to offer next May. According to the latest figures the show will host more than 700 exhibitors from over 70 countries as well as some 2,700 conference participants. More than one-third of exhibitors will probably be from Europe. Speaking at ITB Berlin, Eduardo Santander, executive director of the European Travel Commission, accordingly emphasised the importance of China. “In China, Europe is regarded as a single destination.” Thus, it was all the more important that European tourism professionals learned to network better. “Neither the US or Australia is the biggest competitor of the EU, but we ourselves“, said Santander.

The Central African country Zambia has until now survived mainly on agriculture and mining. Now, however, it wants to diversify its economy, and tourism plays a central role. The development of the tourism sector was part of the strategy to diversify the economy, explained Charles R. Banda, the country’s tourism minister, at ITB Berlin. “If we don’t preserve our nature then we will lose everything and have nothing left that we can show.” And the country really does have quite a bit to show: the legendary Victoria Falls are mainly located in Zambia, the famous Big 5 – every safari-goer’s dream – can all be found in Zambia, and its most famous wildlife reserve, the South Luangwa National Park, was even recently declared the world’s first sustainably managed wildlife reserve by the UNWTO.

The members of the Luxury Travel panel discussion at the Marketing and Distribution Day at the ITB Berlin Convention debated changing attitudes towards a luxury lifestyle. A luxury lifestyle was now less defined by an ostentatious show of material wealth, but instead by seclusion and a high level of personalised service. The panel members included Al Merschen, principal of Myriad Marketing/MMGY Global, Arnaud Girodon, general manager of The Datai Langkawi, Pierre Gugenheim, responsible for advising royal family members at the Middle East International Group as well as Marcus Krall, the recently appointed managing director of Ocean Independence.

Journalists and interested readers can find news on the main topics at the World’s Leading Travel Trade Show posted daily . The Social Media Newsroom has news in German and English on every travel destination represented at ITB Berlin, plus trends and innovations in aviation, cruises, the hotel industry and travel technology. This news website also has the latest from the ITB Berlin Convention, the leading think tank of the global travel industry.