The Tourism Department of Kashmir celebrates New Year in Pahalgam 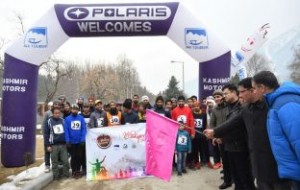 With the tourists booming in North India’s popular hill station in Jammu and Kashmir-Pahalgam, the tourism department of Kashmir celebrates New Year to promote the destination for winter tourism.

Pahalgam, which primarily is a summer destination, receives lesser tourist footfall in winter months as compared to Gulmarg which remains packed.

However, for past few years, the Department of Tourism in Jammu and Kashmir is promoting Pahalgam as winter destination through various adventure filled fun sport activities.

The Department of Tourism in Jammu and Kashmir started the New Year celebration by organizing first ever snow half marathon at Pahalgam, ice-climbing events and All Terrain Vehicle (ATV) ride show.

The Director Tourism Kashmir Mahmood A Shah flagged off the race at Pahalgam Club which passed to Aru and culminated back at the starting point to compete 21 kilometres.

The snow-marathon, which brought Pahalgam alive, is first of its kind half marathon organized under sub-zero temperatures to promote the destination and also keep local youth engaged.

The Department of Tourism in Jammu and Kashmir also organized ice-climbing at Pahalgam in which scores of the trained mountain climbers participated and hiked the cliff.

Later in the evening, the Department of Tourism in Jammu and Kashmir organized cultural and musical events at Pahalgam Club which entertained both locals and the tourists.

The audience flocked and cheered at every musical note and applauded the artist for their live performances.

Among the audience were many tourists who also enjoyed the cultural show.

In the evening, the club was illuminated perfectly while the hoteliers also illuminated their properties giving the resort a festive look.