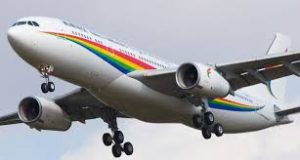 The new air route is operated with Airbus A330 wide-bodied aircraft twice a week on Mondays and Thursdays.  Tibet Airlines has just 12 business class seats on their A330s, in a 2-2-2 configuration.

Representatives from the regional tourism development department and Tibet Airlines greeted the 240 passengers at Lhasa Gonggar Airport by offering them a “hada” (traditional Tibetan ceremonial scarf). Both issued a joint statement this new route will attract more tourists from eastern China and at the same time, it will also attract Europeans to visit Tibet.  The region received 33.68 million visits from tourists in 2018, an increase of 31.5 percent year-on-year.

According to Bai Weisan, President, Tibet Airlines said that Tibet Airlines is looking forward to continuing to maintain a mutually beneficial and win-win cooperation concept with Finavia and Helsinki Airport, to carry out more extensive and in-depth comprehensive cooperation in the future.

Last December, President Donald Trump signed a bipartisan bill H.R. 1872, the “Reciprocal Access to Tibet Act of 2018,”  which seeks to impose a visa ban on Chinese officials who deny American citizens, government officials and journalists’ access to the remote region of Tibet. The opening of Tibet for more western tourist, especially from Europe – in a controlled fashion can be considered as one type of “charm offensive” to dilute American standing on Tibetan issue in front of its allies.