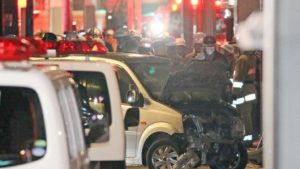 A car deliberately plowed into crowds celebrating New Year’s Eve in a central part of Tokyo, in Takeshita Street injuring nine people. It is located in the tourist district of Harajuku, which runs parallel to the famous Meiji shrine. Meiji shrine is a popular destination for people on New Year’s Eve. The car rammed into the narrow street which was packed with pedestrians and slammed into a number of them.  The street was closed to accommodate revellers who were celebrating New Year.

Tokyo Metropolitan Police has opened an investigation into the incident which occurred at around 10 minutes past midnight on Jan. 1st 2019. A 21-year-old man has been detained on suspicion of attempted murder. One male university student remains in critical condition. The nine injured ranged from teenagers to 50 year old.

Takeshita Street is considered the centre of youth culture and fashion in Japan, attracting tens of thousands of international tourists every day.

Unlike in other major cities, New Year in Tokyo is a relatively muted affair. Japanese people quietly go to the shrine to pray for good fortune in the year to come.