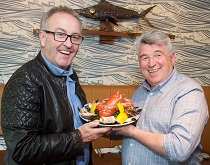 Sydney’s most popular afternoon radio presenter, Chris Smith, is broadcasting live from Ireland this week. The Chris Smith Radio Show is a weekday afternoon show which airs on 2GB, Sydney’s number one radio station, and which also has listeners in Brisbane on 4BC and Canberra on 2CC. Chris’s 300,000 listeners – and potential Australian holidaymakers for Ireland – have been following his journey around Ireland live each day. He is here as a guest of Tourism Ireland and Fáilte Ireland.

Chris has been exploring his Irish roots, which have taken him to Kilkenny (where his ancestors are from). He took a tour of the Medieval Mile and visited Kilkenny Castle and the Smithwick’s Experience Kilkenny. He also met with Kilkenny hurling captain, Cillian Buckley. Chris travelled to Cork, where he met with celebrity chef Martin Shanahan, of Fishy Fishy Restaurant in Kinsale. In Dublin, he visited the Guinness Storehouse, Kilmainham Gaol and EPIC – The Irish Emigration Museum.

“We are delighted that The Chris Smith Radio Show chose to come and broadcast live from Ireland – it’s the kind of publicity that money simply could not buy and a superb way to highlight Ireland to more than 300,000 Australians, positioning Ireland as a highly desirable place to visit,”said Sofia Hansson, Tourism Ireland’s Manager Australia & New Zealand. “Publicity is an important element of our overall promotional programme, helping to raise awareness through the Australian media of the many things to see and do on a holiday around the island of Ireland.”

In 2017, we welcomed around 208,000 visitors from Australia and New Zealand. Tourism Ireland has an extensive programme of promotions under way again this year, to continue to grow that number.