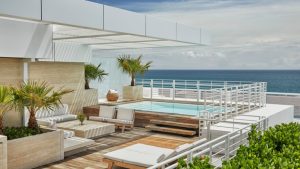 The Big Game will be hosted in sunny Miami, Florida this February 2020 and Four Seasons Hotel at The Surf Club invites individuals to join in on the festivities and book the Marybelle Penthouse Suite for an unparalleled experience.

Named after the yacht where Harvey Firestone discovered the land on which to build The Surf Club, the Marybelle is the largest and most exclusive suite, fit for extravagant celebrations. With unobstructed sunset views, four elegantly appointed bedrooms, a private rooftop pool, sun-soaked terrace and expansive living spaces designed by Joseph Dirand, The Surf Club invites guests to enjoy the festivities in style.

For guests and residents already booked in over the Big Game weekend, Four Seasons Hotel at The Surf Club will be hosting a tailgate and screening event on the Lawn. An assortment of themed food, specialty drinks and a BBQ will be served.