This tourism company all set to save Venice from tourist pressure 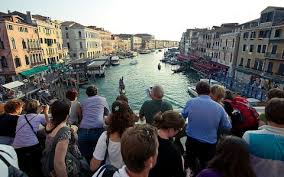 Every year, almost 1,000 residents of Venice desert their city and move to mainland Italy. They’re forced out due to increasing rents and overcrowding, because of millions of tourists descending en masse every year. In a city of less than 53,000 residents, it’s a shaky situation.

“It is a hemorrhage which threatens the very existence of the local community, and it’s old culture, heritage, and identity,” said Valeria Duflot, co-founder of Venezia Autentica, a startup based in the city.

Duflot, together with co-founder – and partner – Sebastian Fagarazzi, introduced the company in 2017 to try to solve the mass exodus problem. Duflot is French, and so attracts tourist experience, whereas Fagarazzi is a born and brought up in Venetia who saw his family business struggle with rising rents, and eventually, close its doors.

“When I first came to Venice I wanted to have an authentic experience; eat like a local, shop from traditional stores, but I struggled to do so.”

“One day Sebastian and I had an ‘aha’ moment. I found myself on the main street of Venice, between a huge group of day trippers, and a small group of Venetian youths, bellowing local songs and waving the Venetian flag. I suddenly realized that one group was hurting the other, and that I can’t have been the only visitor to have wanted to experience the real Venice.”

Duflot instantly called her partner, and told about her vision: if someone directed like-minded visitors, who are interested to experience local culture, to the right businesses, then it would be quite likely to maintain Venetians, who’d be able to profit from tourism, rather than be forced out by it.

“The city was running out of time, and so we decided to give it a shot.”

Tags: tourism company all set to save Venice