Tourism in Turkey expected to make a major comeback this summer 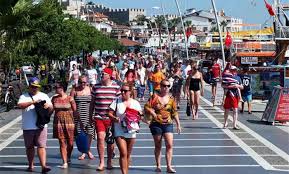 Tourism in Turkey is expected to make a major comeback this summer with Germans and Russians flocking back to its beaches. However, accommodation prices will take longer to recover after the tough years.

Militant attacks and a failed military coup triggered a sharp drop in foreign visitors in 2015 and 2016, forcing hotels to slash their room rates.

At the ITB travel trade fair in Berlin, Turkish hoteliers spoke about increasing bookings for the peak holiday season, although profitability is yet to catch up.

This year, the average hotel prices are likely be around 30 percent above the year-earlier level, but for the summer season they would come to only around 25 Euros per night.

Some hotels did not survive the slump. Data from the Ministry of Culture and Tourism revealed that the number dropped to fewer than 2,800 in 2017 from 3,300 a year earlier. Due to the lower prices, occupancy rates increased up to 60 percent last year from 53 in 2016.

The number of foreign visitors was up 28 percent at 32.4 million in 2017 and is expected to rise further to more than 38 million this year.

By 2023, Turkey aims to attract 50 million holidaymakers per year and earn US$50 billion in tourism revenues by diversifying beyond beach vacations to wellness and sports holidays, along with attracting more holidaymakers from Asian countries including China, India and South Korea.