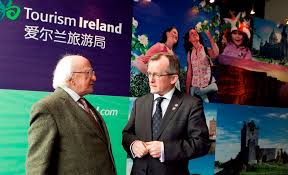 Brendan Griffin TD, Tourism Ireland and Minister of State for Tourism and Sport have introduced a multimedia autumn campaign that would boost up late season travel to Ireland worldwide.

Tourism Ireland’s autumn campaign will emphasize festivals and events in the island of Ireland in the coming months – from the Dublin Theatre Festival to the Bram Stoker Festival, Galway International Oyster Festival, and up to the New Year Festival in Dublin.

It will focus on off-peak city breaks, along with attracting visitors to more rural areas. As part of the campaign, Angela Scanlon, a TV presenter will lead a new series of online videos, part of a new promotion with The Daily Telegraph in Britain to drive holidays here.

Minister Griffin said: “The recent CSO release on tourism and travel shows that spending in Ireland by overseas visitors in the first half of 2018 has increased by over 8% on the same period in 2017. I believe that the autumn marketing campaign will be successful in promoting late-season travel.

Sounding a note of caution, the Minister continued: “Whilst performance has been good, getting visitors to Ireland in the off-season remains a challenge for tourism agencies and the industry.”