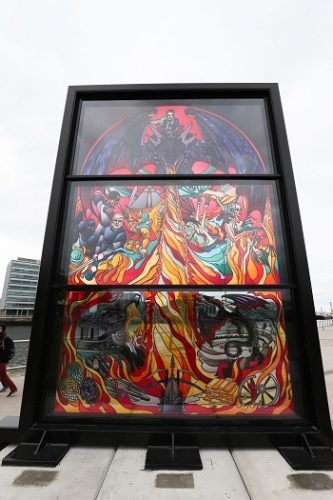 It’s week four of Tourism Ireland’s 2019 Game of Thrones campaign and the latest ‘Glass of Thrones’ has been revealed in Belfast today (Monday, 6thMay) – at the SSE Arena.

To celebrate the final series of Game of Thrones, Tourism Ireland — in partnership with HBO — is erecting six beautifully crafted, stained-glass windows around Belfast. When all six windows are up, they’ll form a new Game of Thrones trail in the city, something to celebrate the impact the show has had on the city, and on Northern Ireland, and another great reason for fans from all over the world to come and visit.

Each stained-glass window – or ‘Glass of Thrones’ – is highlighting a key House from the show. This week’s window is all about House Targaryen: from Daenerys’ dragon egg laden re-emergence from the funeral pyre, to Drogon’s fiery onslaught of the gold convoy, this fourth window represents the fans’ favourite, most shared and most discussed Targaryen moments.

The Tourism Ireland campaign is promoting Northern Ireland, and our Game of Thrones connection, to millions of fans in ten markets right now – including Great Britain, the United States, Canada, Australia, France, Germany, Spain, Italy, the Netherlands and Scandinavia. The campaign involves Tourism Ireland sharing details of the new installations each week, releasing a mixture of short films, images and cinemagraphs (“living” photographs) to fans around the world – via Facebook, Instagram and YouTube.

Tourism Ireland’s first ‘Glass of Thrones’ is located opposite the entrance to Belfast City Hall, the second is at the Waterfront Hall and the third is at the Lagan Weir.