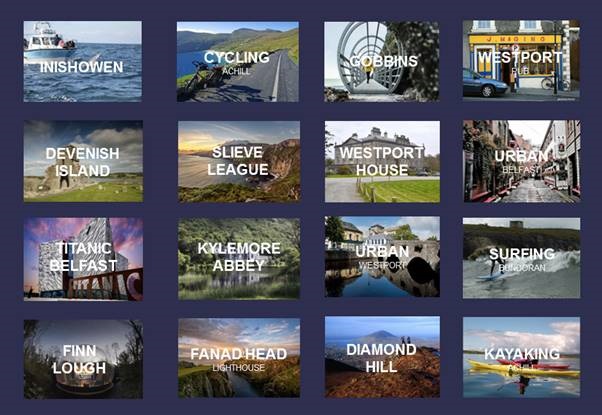 After months in development, Tourism Ireland is excited to be launching its first major global campaign since 2011: ‘Fill your heart with Ireland’. An industry-first, the campaign has been created by the heart rate data of two of our visitors.

Tourism Ireland invited a real married couple from Sweden – who had never visited Ireland before – to take a trip here, wearing custom-made technology to track their physiological responses along the way. The couple was hooked up to covert heart monitors, which were linked to a head-mounted camera that captured all of their experiences. The data provided by these heart rate monitors determined what footage would feature in the advertising.

The result is a campaign that proves the heart-filling effect that the island of Ireland has on our visitors – whether they’re kayaking on Achill Island, exploring Devenish Island in Co Fermanagh, or climbing the highest sea cliffs in Europe at Slieve League.

Speaking about the campaign, Mark Henry, Tourism Ireland’s Central Marketing Director, said: “This is the first major global campaign for Tourism Ireland in seven years. It is a truly innovative approach which will set the island of Ireland apart from our competitor destinations. ‘Fill Your Heart with Ireland’ has been designed to drive continued growth to the regions and to encourage visitors to travel off-peak. It features locations that have been less visited by overseas visitors and highlights outdoor activities like cycling, walking and kayaking. We are confident that our new campaign will help deliver another record year for tourism in 2019.”

After eight years of consecutive tourism growth, Tourism Ireland is focusing its new campaign on locations that many potential visitors may not know. This first phase of the campaign highlights 16 less well-known locations and attractions – all of them having affected the heart rates of our couple! This goes to show that even our hidden gems, just as much as our better-known attractions, can excite, inspire and entertain.

Mark Henry continued: “This is the world’s first-ever marketing campaign to use tourists’ biometric data to design an advert. We have combined data and creativity to literally show how the island of Ireland fills visitors’ hearts with positive emotion. The ad has researched extremely positively because viewers can see it is clearly authentic and credible; and we’re confident that it will motivate them to want to travel to Ireland to experience this for themselves.”