Tourism Ireland welcomes growth of +7.1% in overseas visitors for January-October 2018 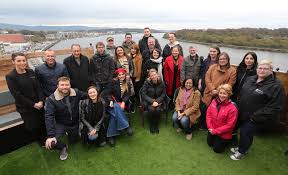 Commenting on figures published today by the CSO for overseas arrivals for January to October 2018, Niall Gibbons, CEO of Tourism Ireland, said: “Today’s figures from the CSO confirm that overseas visitor numbers increased by +7.1% during the January-October period – 605,300 additional overseas arrivals when compared with the first ten months of 2017.

“Particularly welcome in today’s figures is the continued strong performance from North America, with an increase of +13.7%. A number of factors are working in our favour, including more airline seats than ever before, from more gateways across the US and Canada. We’ve also seen really good results from Mainland Europe, up +9.6% on January-October last year, with particularly strong performances from Germany (almost +20%) and Italy (almost +11%). Tourism Ireland has prioritised North America and Mainland Europe, as markets which offer a strong return on investment, in terms of holiday visitors and expenditure.

“Visitors from Australia and emerging markets like China are up +6.3%. While we welcome the fact that arrivals from Britain are up +1%, the impact of Brexit on outbound travel from Britain is still a concern.

“Tourism Ireland has a number of late-season campaigns under way right now, to kick-start our promotional effort for 2019. Earlier this week, we outlined our plans for next year, when we will be pulling out all the stops to ensure that the island of Ireland continues to increase its share of the global travel business. Our aim is to grow overseas tourism revenue in 2019 to €6.5 billion, for the island of Ireland.”