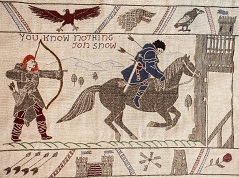 Tourism Ireland’s hand-crafted Game of Thrones Tapestry goes on display in Bayeux, Normandy, from today (13 September). It will be exhibited in the historic Hôtel du Doyen in Bayeux, within walking distance of the legendary 11th-century Bayeux Tapestry – which was a key source of inspiration for its new neighbour.

Tourism Ireland’s Game of Thrones Tapestry was created in 2017, in conjunction with HBO and National Museums Northern Ireland – featuring some of the most memorable and exciting scenes from season one to season seven. After the final episode of season eight aired earlier this year, a team of 30 volunteer stitchers completed the final section of the tapestry. It is now 87 metres long.

Tourism Ireland is taking this opportunity to shine a spotlight on Northern Ireland and its strong connection with the hugely popular TV series – in France and elsewhere around the world. To mark the opening day of the exhibition, Tourism Ireland has organised a press conference and Northern Ireland showcase event in Bayeux; more than 40 French and international journalists will attend.

Guests will experience and see:

After a decade of filming and production in Northern Ireland, Game of Thrones finally came to a close last May. Now that the eighth and final series has aired, Tourism Ireland’s aim is to ensure the show’s legacy is felt long after that final episode – so that the connection between Game of Thrones and Northern Ireland will be remembered long after the show has left our screens.