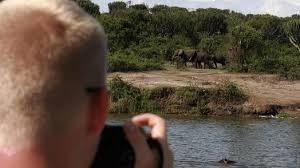 Famine followed by climate change is probably to consume a freshwater lake in Morocco. This lake attracts thousands of migratory birds between Europe and Africa.

Considered a national treasure because of its rich biodiversity, environmentalists are apprehensive that rising temperature could claim this lake entirely.

Bouchra El Asr is an Engineer at the Regional Directorate of water and forests. He is fighting against desertification North West in Kenitra.

“All of this site is in a basin, a basin which is bordered by two dune bars. And the dunes are made up of sand, of course. The substratum here is a sandy substratum. So, if we pictured this area without the forest, without the juniper bushes, without the evergreen shrubs , without the small trees , well — all the city of Kenita, even the city of Mehdia — all the infrastructure there, there would be a risk of siltation. So really, the role of this forest is to keep the sand where it is”, she said.

The freshwater lake extends through the Sidi Boughaba reserve, around 7 kilometers from the city of Kenitra. It was confirmed in 1951 as a natural and cultural site. However sadly, tourism is taking its major toll on the survival of this natural wonder!

“The number of visits has exceeded the capacity of this reserve, so visitors have become a threat to biodiversity. There are many species of plants in danger of extinction, some animals have left this area due to inadequate living conditions, there are animals that are born here and have become a threat to the environment and there is also pollution in the forest and at the lake”, said Bouchafra Abdeslam, Secretary General of the Spana association for the protection of animals and nature.

However all hope is not lost yet. The High Commission for Water and Forests of Morocco and the Fight Against Desertification is all set to defend one of the 26 wetlands of global significance of this country.

“This reserve is considered as a framework that is developed by the state, so that everyone knows that this area is a protected framework, not only for protection, but also so that people can enjoy the benefits of this system without endangering it”, said Mohammed Andichi, Director of the Directorate of fight against desertification and preservation of nature of in Rabat.