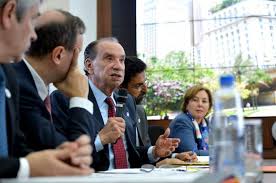 “The government is focused on improving the business environment and restoring the country’s credibility to attract international investment,” he said during the meeting with Gloria Guevara Manzo, president of the World Travel and Tourism Council (WTTC).

Among the concrete measures that the minister cited as an example of the government’s effort to open Brazil, the most important were visa exemption and the opening of airlines to foreign capital.

“These are key measures to increase the competitiveness of tourism in the country,” said Gloria Guevara, who was Mexico’s tourism minister for three years (2010-2012).

During her tenure, Mexico facilitated visas for tourists who had already entered the United States. According to a study by Oxford Economic, the measure alone created 1.3 million jobs in the country.

Gloria compared tourism in Brazil with a rough diamond.

“The market is very enthusiastic, because before tourism was not a priority, but the reality has changed and today the country opens excellent opportunities for private initiative,” she said.

She took advantage of the meeting with the minister to invite Brazil President Jair Bolsonaro to attend an event with the 35 presidents of the world’s largest tourism companies in September in New York or at the WTTC general conference in November in Puerto Rico.

“It would be important for the President to show the world his interest in betting on tourism and attracting investment,” she added.

Marcelo Álvaro Antônio has made a commitment to talk to the President about the issue.

Also on Tuesday, the minister attended a conference on ‘health tourism and welfare’ with WTO Secretary General Zurab Pololikashvili.

According to market estimates, as world life expectancy increases, medical tourism is expected to grow

In the morning, during a meeting of the Council of the Americas (CAM), Brazil’s tourism minister paid sympathy to the Bahamas authorities for Hurricane Dorian, which left at least 50 people dead in the country.

“Bahamas is perhaps the most tourism dependent country in the world. We need to show that of the more than 70 islands in the archipelago, only two have been hit to prevent further damage to the economy, ”said Bartlett.

More than 60% of Bahamas GDP depends on tourism.

Also at the CAM meeting, Minister Marcelo reported that the Brazilian government is mobilized to control the burning of the Amazon and that all appropriate measures have been taken.

“Tourism has everything to help in the sustainable development of the region,” he said.