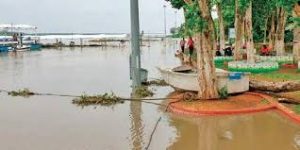 Bhavani Island, a unique tourist destination in Andhra Pradesh and an important asset of the Tourism Department, has been underwater for over a week due to the heavy inflows to Prakasam Barrage.

As of Tuesday, the island was still inaccessible to officials of Tourism Department as the Water Resources Department had not permitted the former to venture into it as the inflows were continuing.

Officials concerned feel that the island’s landscaping could have been washed away. They say electrical and electronic equipment, furniture and others also could have been damaged.

“We will visit the island on Wednesday if the officials concerned grant us permission,” APTDC executive director (Bhavani Island) G. Umamaheswara Rao said.

The island jetty and the entrance where boats from Berm Park would drop tourists too got submerged and have been visible only for the last two days.

Also, Berm Park on the bank of the the Krishna river was water-logged for days and has been restored to certain extent on a war- footing. Rooms in the island could have been spared by the flood as they are located on treetops or similar structures. However, the revenue loss incurred on account of closure and cancellation of bookings is heavy.

According to officials, the park incurred a loss of approximately ₹55 lakh on account of damage to equipment, furniture, interiors and also revenue losses due to closure.