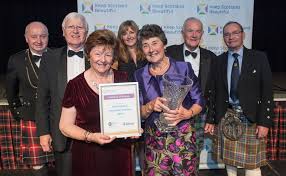 At the Scottish Thistle Awards, tourism businesses across the west of Scotland have earned recognition from industry leaders.

A total of 15 tourism businesses and individuals from Glasgow, Ayrshire and Arran, Dumfries & Galloway and Argyll & Bute struck gold at the Scottish Thistle Awards regional finals for the West, which took place on Thursday, 28 November, at Òran Mór in Glasgow.

The Scottish Thistle Awards, now in their 27th year, help shine the spotlight on individuals and businesses going above and beyond to create a destination and visitor experience worth talking about amongst our valuable tourism industry. They champion the very best of the Scottish tourism industry, celebrating innovation, success and excellence in the sector.

2019 saw almost 600 entries submitted, including more than 1,000 nominations from members of the public keen to give hotels, restaurants, B&Bs, visitor attractions and individuals the opportunity to earn the recognition they deserve from their own industry peers.

The regional winners have earned their place at the prestigious National Final in March, where they will join the country’s tourism elite to be honoured with the highest accolade in the Scottish hospitality and tourism sector.

Rebecca Brooks, chair of the Scottish Thistle Awards Industry Panel and VisitScotland Board member, said:“On behalf of the panel, I’d like to congratulate all our regional winners. The Scottish Thistle Awards give businesses and individuals working within tourism in Scotland the opportunity to earn the recognition and appreciation they deserve from their own industry peers. They celebrate those people and businesses throughout the country responsible for offering the warmest of welcomes that Scotland is famous for.

“Tourism is more than a holiday experience, it creates jobs and sustains communities. These awards let us recognise the unsung heroes of our industry who show real dedication and enthusiasm for Scotland’s tourism industry.

“I would like to wish all our regional winners the very best for the next stage of the competition.”