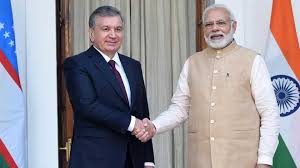 “We welcome with open arms any and every kind of investment in Uzbekistan. Tourism in the country had grown exponentially at 200% in the last one year and we are short of 50,000 rooms.There is a great scope for Indians to invest in hotels,restaurants, guest houses, transport infrastructure and bring in airlines to cater totourism,” said Arziev while interacting with industry members of PHDCCI-Rajasthan.

To quote chairperson of the PHDCCI-Rajasthan, Jayshree Periwal, “Barely two hours away, Uzbekistan is a great destination and we hope both the countries have much to gain, economically, socially and culturally.” While speaking with the representatives of the industry, the ambassador made clear several sops that Uzbekistan is interested to extend to investors.

For hotels, the government would offer free land other than zero tax benefits for 15 years to registered investors. “We would insure safety of investment and also promote those interested in hill resorts that abound with hot springs for spas or healing medical tourism. Developing tourism infrastructure is a priority,” said Arziev.